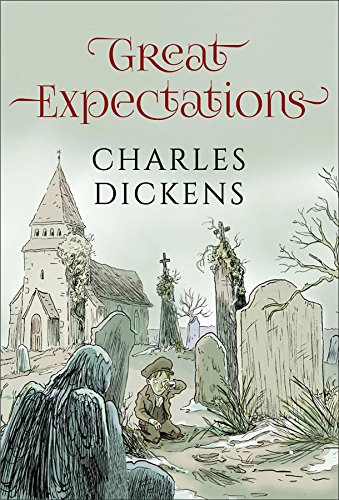 Pip, an orphan raised by his bullying sister and her sweet-natured blacksmith husband, discovers one day that he has a mysterious benefactor.  The good-hearted Pip suddenly has “great expectations” of his life and begins to reject spiritual valutes for materialistic ones.

Despite his financial windfall, things do not go well for Pip.  Estella, the beautiful but haughty young woman he loves, coldheartedly tortures him.  And then there is the reappearance of Magwitch, the escaped convict who forced Pip to steal for him when Pip was a young boy.

I had what might be called “great expectations” for this book. 😉

I had enjoyed the story of Oliver Twist, also by Charles Dickens, so earlier this summer I picked up Great Expectations.  I was immediately drawn to the style of the narrative.  Like this first paragraph.

My father’s family name being Pirrip, and my christian name Philip, my infant tongue could make of both names nothing longer or more explicit than Pip.  So I called myself Pip and came to be called Pip.

The first part is fairly well paced, and the story keeps moving.

In the middle it gets slow, and I got confused over some of the characters.

And then, in the end, it redeems itself with some action, a few surprises, and the crashing of all Pip’s dreams. (Almost.)

The characters are all so vivid and each one is different!  From haughty Estella to humble Joe, this cast is quite incredible.  (Though in the middle, as I said, there are quite a few characters to get confused!)

I read lots of classics, so I didn’t find it too hard of a read.  If you are willing to plow through the boring parts, this is a great book!

Great Expectations is on Amazon HERE!