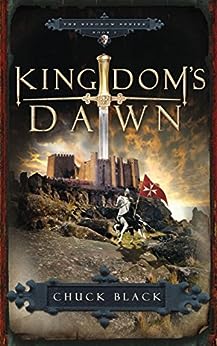 Sixteen-year-old Leinad thought he was a common farmer’s son, nothing more.  He wondered why his father had trained him for years to master the sword – not exactly the tool of the trade for farmers.

Only then does he begin to understand his calling – a calling no other man in the entire kingdom of Arrethtrae can fulfill – a calling given by the King Himself.

Teamed with a young slave girl, Leinad is thrust into adversity and danger  – for the Dark Knight and his vicious Shadow Warriors will stop at nothing to thwart the King’s plan to restore the kingdom.  Leinad will need more than a sharp blade and a swift hand to fulfill his mission and survive the evil plots of the King’s sworn enemies!

Journey to Arrethtrae, where the King and His Son implement a bold plan to save their kingdom; where courage, faith, and loyalty stand tall in the face of opposition; where good will not bow to evil – and the future of a kingdom lies in the hands of a young man. 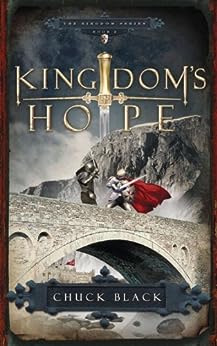 Fairos thought he had sentenced Leinad to death in the Banteen desert.  But Leinad returns – a true Knight of the King.  His skill with the sword is unmatched this side of the Great Sea and he is determined to free the people from their bondage to Lord Fairos.

Leinad quest takes him from the chains of slavery, near the jaws of dragons, and close to the arms of love. And when the rest of the kingdom turns away from the King and the Code, Leinad turns to his most faithful ally, Tess. With her help, Leinad struggles to conquor his own doubt.  But he must do so soon, for the King’s archenemy, the Dark Knight, is about to unleash his entire evil force and only Leinad can stop them…

Journey to Arrethtrae, where the King and His Son implement a bold plan to save their kingdom; where courage, faith, and loyalty stand tall in the face of opposition; where good will not bow to evil; where the future of the kingdom is at the threshold of either victory or defeat – and one man holds the key. 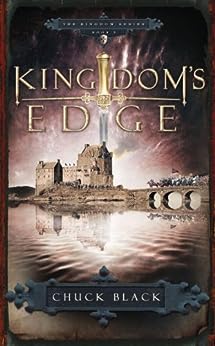 For Cedric of Chessington, every day is the same: full of poverty and despair.  He knows that it will never change.  Or so he thinks.

Then, a stranger comes to the city.  Drawn to the man’s mysterious ways, Cedric discovers the stranger’s humility belies great strength and wisdom.  That’s when an astounding truth becomes clear – the stranger is a Master of the Sword, and He is there to train Cedric.

Suddenly propelled into a desperate battle against evil, Cedric must rely on the Master’s training if he is going to survive.  But the ultimate battle is yet to come, for the Dark Knight is at work, implementing his plan to take over the kingdom.  Will Cedric be ready to stand in the face of pure evil?

Journey to Arrethtrae, where the King and His Son implement a bold plan to save their kingdom; where courage, faith, and loyalty stand tall in the face of opposition; where good will not bow to evil; and where hope and compassion are as powerful weapons as the sword.

Graphic Details – 5, a few scenes with details of battles/battle wounds.

The Kingdom Series starts in Kingdom’s Dawn with the story of Leinad. Leinad represents the Old Testament people from Seth, Adam’s son, to Malachi.

Second is Kingdom’s Hope, which continues the story of Leinad, including the captivities.

Third, and last for the day, Kingdom’s Edge is where Leinad is left behind and Cedric comes into the picture.  And that starts the New Testament stories.

The fighting scenes are very well portrayed, which is great!  (Those scenes are really hard to write well.)  And these books, though allegories, are very biblically accurate!

And I almost forgot: there are audio books too!  The narrator is really good;  there are also sound effects. 🙂

See you all next week!

The Hobbit: or There and Back Again

Bilbo Baggins is a hobbit who enjoys a comfortable, unambitious life, rarely traveling any farther than his pantry or cellar. But his contentment is disturbed when the wizard Gandalf and a company of dwarves arrive on his doorstep one day to whisk him away on an adventure. They have launched a plot to raid the treasure hoard guarded by Smaug the Magnificent, a large and very dangerous dragon. Bilbo reluctantly joins their quest, unaware that on his journey to the Lonely Mountain he will encounter both a magic ring and a frightening creature known as Gollum.

In a hole in the ground there lived a hobbit.

So starts the prequel to J.R.R. Tolkien’s famous work, The Lord of the Rings.

Hobbits, known for their hairy feet and complete lack of height, generally stay at home and quite away from adventures.  Bilbo Baggins is not exception.

But when visited by a wizard named Gandalf and a whole troop of dwarves, that’s about to change.

The Hobbit is a fun story (with a bit of suspense mixed in) that the whole family will enjoy!  Bilbo is a great main character.  He’s funny.  He’s a poet.  And, of course, a great burglar. 😉   Definitely a great read!

Find The Hobbit on Amazon HERE!

Today I have an announcement! *Drum roll*

Which means all those annoying advertisements won’t be around any more. 🙂

What do you think?

I’m super excited for this and I hope it will work out well!

Look for another book review on Friday!

I’ve been trying for a while to do a photography post and haven’t gotten around to it.  But, finally, here it is!  Enjoy!

A butterfly on some Russian sage.

And last of all, a blackbird hanging out on a rock.  I wonder what he’s thinking?

Which picture is your favorite?

The Lord of the Rings

In ancient times the Rings of Power were crafted by the Elven-smiths, and Sauron, the Dark Lord, forged the One Ring, filling it with his own power so that he could rule all others. But the One Ring was taken from him, and though he sought it throughout Middle-earth, it remained lost to him. After many ages it fell by chance into the hands of the hobbit Bilbo Baggins.

From Sauron’s fastness in the Dark Tower of Mordor, his power spread far and wide. Sauron gathered all the Great Rings to him, but always he searched for the One Ring that would complete his dominion.

When Bilbo reached his eleventy-first birthday he disappeared, bequeathing to his young cousin Frodo the Ruling Ring and a perilous quest: to journey across Middle-earth, deep into the shadow of the Dark Lord, and destroy the Ring by casting it into the Cracks of Doom.

The Lord of the Rings tells of the great quest undertaken by Frodo and the Fellowship of the Ring: Gandalf the Wizard; the hobbits Merry, Pippin, and Sam; Gimli the Dwarf; Legolas the Elf; Boromir of Gondor; and a tall, mysterious stranger called Strider.

Do you like stories of adventure? Journeys to free lands from an evil, tyrannical overlord?  When up to the very last moment you’re wondering what will happen next?

Frodo is a normal hobbit.  But even when you’re ordinary, extraordinary things can happen.

Kingdoms are at stake.

Will Frodo fulfill the quest in time?

(Frodo also has a not-so-normal cousin named Bilbo, whose adventures you can read about in The Hobbit. (Actually, I would recommend reading The  Hobbit first; The Lord of the Rings is a sequel to it.))

Lord of the Rings, an incredibly crafted story.  Sure to be a favorite.  (That is, if you read it!)

Lord of the Rings is on Amazon Here!

Well, that’s all for today!

The Star Under the City

When Ellen is suddenly orphaned and dropped alone into a strange city under tight Nazi control, she struggles to survive from day to day. Her life takes an unexpected turn when she finds a mysterious, metal six-point star that is slightly different from the ‘Star of David’ all Jews are forced to wear. Not only does the star feel like a sign of hope, but it sets her on a mission to find out what it really means. As she begins to wonder if she’ll ever find answers, she meets Lenz, and her life is flung into a whirlwind of danger and hardship, new friends and new enemies, and opportunities to learn trust and true sacrifice. As she attempts to find her place in the conflict, she discovers she is a part of something so much bigger than she could ever imagine.

I first found out about Maggie on Noble Novels, a young writers’ site I am a part of.  I was very impressed with her writing; soon I found her blog.  In 2016-17 she talked a lot about her novel that she’d written in NaNoWriMo, and that she was then editing.

When it finally came out, I was so excited! I pulled weeds in the yard to earn a copy. 😉

THIS BOOK IS INCREDIBLE!!! I mean, I loved it!!! The characters are real and relatable.  The plot is excellent.  The emotion is amazing.

Tytus is so funny!  Lenz and Willie just about tie for favorite character.  Ellen is so relatable.  I just want to sob along with her when *ahem* bad things happen!

All that said, please read this book!  Find your copy here.

Talk to you all later!

NOTE: I have done a review on The Star under the City before, but I decided to re-do it with the new system.

There’s another contest going on at Noble Novels!

If you didn’t know, NN is a writers’ site started by Holly Ciampi.  It’s really neat!  Click on the picture or HERE to find out more!